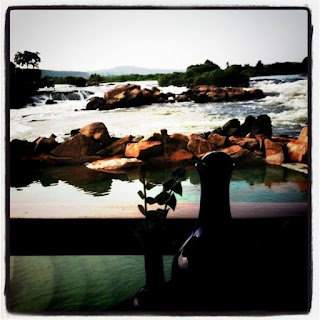 We just moved into a home that doesn't feel like home yet. Four truckloads of our things fill the garage in makeshift heaps. Said goodbye to the open windows and the sunflowers.

Before we could breathe a sigh of relief, that we and our children are not homeless, begging for bread on the streets, our landlord called on my birthday.

He doesn't want the girls in his home anymore, says it isn't going to work out.
After he gave his word.
After we paid and loaded a lorry full.
After we just put six months down on our new place and left our home of three years because we trusted him.

Wants to kick 17 little Kingdom carriers rescued from rape and abuse, out on the streets in a week.
Someone called from the farm: the pineapples have rot and some are dying.

I could have laughed at the irony of it all, if it wasn't so cruel.
Tyson and I are in Jinja trying to relax to the sound of the rushing Nile river when we get the news.

And I know, without a doubt, these are the costs of setting the captives free. The enemy is not happy.


Last week we ended a counseling seminar where there were so many testimonies of freedom.

One woman, a former prostitute whose given her life to Jesus shared, “I thank God so much for this healing that has broken all the rooms the devil had built in our lives.”


Freedom has its price.
He wields his strongest weapon against us.
He flaunts discouragement in my face and taunts me to give up.
What do we sacrifice for really?


We've come here to rest. But he wants to steal our joy.
What we will we choose when it's hard?

Faith or fear. Trust or despair.
Do we believe that God is good?


Where we have a chance to rise up.
I let my heart feel the pain of it. After all, this is not denial.
Then we pray and give it to Jesus. These, are not our battles to fight.

And we make a choice: Trust.
Faith.
Release.
Gratitude.

We decide to enjoy our time and not talk about it. We decide to let God be God. Let Him fight for us.

And we have a beautiful weekend letting the sound of water soothe our weary souls and weave us more together, and even more in love.

But now I know, that Father is good. Always.
He is at work while I wait, clinging to His hand.
If I believe this, then I cannot worry. I can only praise Him, while I fall in His arms.

As I read through Paul's letters from prison, I am reminded that suffering does not mean that we have done something wrong. That we messed up or mis-stepped or made a mistake. I used to think that way. That is was some sort of punishment.

But suffering with and for Jesus is a gateway to glory.


Sometimes the path of suffering is exactly where God wants us so greater beauty can be released.
Faith built.
Growth spurred.
Paul said, “Everyone who wants a godly life in Christ will suffer persecution.” (2 Timothy 3:12)
Sometimes I forget that.

On our drive back to Gulu, with the sun setting in the expansive sky and the smell of acacia trees, thorny and sweet, breezing in our window to soothe the day's sticky heat, I know that Father is for me. And that I love this place. The North. With her woundedness and confusion, with her fickle heart.


Sure, there are roaches in my bathtub, and a sink which is leaking, and mosquitos which buzz in my ear in the heat when the power is out, while the dogs keep barking at night, but I will make this place a home.

I'll dig up my zucchini plants and replant them if I have to, all the while thinking of the wise words of a wiry Acholi man named Dickson: “Nothing can defeat a human.”
We'll keep laying a foundation of God's goodness in this place. Waiting, all the while knowing, He keeps His promises.

And eventually, the sun will stretch out her arms to split through the clouds.


And we will see it.
Because we've chosen to.

“For since the world began, no ear has heard and no eye has seen a God like you. Who works for those who wait for Him.” Isaiah 64:4
Posted by Unknown at 5:43 AM

This post resonates so deeply in my heart for you, your family, and all of the girls and women at Zion. There is so much profound truth in this post. Hold on to your gratitude and worship Him through the burn. God IS good. All of the time. There is no darkness in Him (1 John 1:5). Your courage to stand in the face of the enemy's attacks is testament to your faith and love for Him. He will reward you. I am praying for you and all of the girls and women--particularly that God will move in such a mighty way with a solution to this particular problem, that it will be a great "Ebenezer stone" that you will be able to use to witness to others of God's faithfulness and love. Thank you so much for your heart and desire to share your love for Christ with these women.