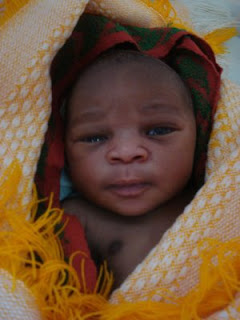 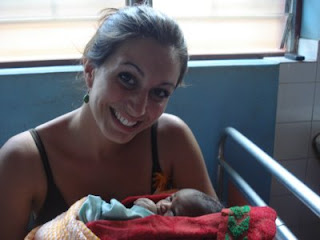 (me with our latest addition to the family :)
After 15 hours of labor in a hospital that supplied little more than a table for giving birth...
here we are.
Florence was living in a camp before we found her, abandoned and pregnant. She had no family support. Now she lives with me and had a hand to hold when she gave birth to this little man.

It's so hot in Gulu that I feel I might actually be losing brain functionality. Dry season. In Africa. Winds like the Santa Ana’s sweep through the town scattering dust into people's eyes. Nothing like a hot Thanksgiving in November to make you feel normal.

It's dry and it's dusty, but it doesn't hinder our progress.

We have a lot to be thankful for. In just the last four months…

*We've taken in 11 girls and 13 children from the camps into a home where they receive safety, love, a family, food, counseling, discipleship, life skills, parenting skills, medical care, and soon…vocational training

*Girls got their feet washed and beautiful painted toes

*5 girls started a friendship with Jesus

*Stella forgave her father who abandoned her

*Josephine was healed of a blood disease

In the last four months I’ve…

*Killed about 1,000 spiders…two which were enormous and I don’t want to talk about

*Eaten about 20 kilograms of rice

*Been called “mono” about 1.7 million times

*Wanted to throw about 20 computers because of the internet

*Done about 100 doctors visits. I shudder to think a child can actually die here of malaria—a preventable, treatable disease

*Been thankful for friends who listen when you need to complain

*Laughed harder than I can ever remember laughing

We had a scare this week. Florence, our pregnant mama, was leaking amniotic fluid and we thought she was going into early labor. We took her to Lachor hospital where we waited for hours to be seen. It ended up that the baby just needed to be turned but she had to stay there for a few days on bed rest. We brought her food and everything she needed, but there was a misunderstanding on the day she was released. So poor Florence waited for us, and when we didn’t come her heart that has endured so much rejection and abandonment, resorted to anger. Such a normal, human response. We called to check on her and she said she was going back to Awer because we didn’t love her. I was crushed and told her to stay and that we were coming for her. But what I love most about this story is that Stella, one of my other girls---a real leader in our house---said she was going with me because she wasn’t willing to lose one of our family. And I realized that a month ago these girls lived their lives on their own, used to pain, used to disappointment, but now they’ve become a part of something they are willing to fight for. Something they love. So we hopped on boda’s at night and made the dusty ride at dusk to Lachor which is not the smartest thing I’ve ever done, but we were women on a mission. As I sat on the boda praying that God would heal Florence’s heart and that she would forgive us, God reminded me of the story of the lost sheep.

"If a man owns a hundred sheep and one of them wanders away will he not leave
the ninety-nine on the hills and go look for the one that wandered off? And if
he finds it, I tell you the truth, he is happier about that one than all the
others who did not wander off." Mt 18:12-13

And He told me that the way I would drop anything to rush to Florence at the thought of losing her, is the same way He feels about us. I wanted to cry on the boda but I thought it would just make the dust stick to my face even worse. When I saw Florence, I threw my arms around her and told her sorry over and over and she held onto me and smiled.

The happy ending to this story is that Florence is home and she’s forgiven us. Baby is fine. And by Christmas I hope to be holding a tiny, Acholi baby in my arms. We have a lot to be thankful for.

(from my friend Lee who came to visit while we were handing out supplies
to the girls I brought back from the US)
Posted by Unknown at 3:13 AM No comments:

It's amazing what a single month can do to change a person's life.

A month ago they did not smile.

Now, everywhere the sound of laughter and children showing off their teeth.
The same children who a month ago would cry in their mother's lap.
Now they play. Like normal kids. Like our kids. They build blocks and race cars.

A month ago they did not dream.

Now they sit around in circles and talk about going back to school or learning to do catering to continue the baking skills they've learned at our house (not from me, I know that would be too much of a miracle ! :)
Now they...

Dream and drum in the morning.
Dream and go to bed with bellies full.
Dream and love on their children.
Dream without fear.

Today in counseling class Janet said she no longer fears closing her eyes at night because if she has a nightmare she uses the word of God and it goes away. Linda was afraid of being in groups of people, but isn't anymore. Josephine was afraid of singing in front of others, but now can sing with a smile.

A group called Pray With Africa came to visit and asked the girls their prayer requests. I was most touched by Pamela, my little 16 year old who was raped last year....she asked them to pray for me. I wanted to just ball right there, but I kept it mostly together.

I watch how proud they are to show me they can make cookies or the new stitch they've learned, or how our house is now decorated with their beautiful artistry.

Right now they are laughing in the kitchen making dinner.
It's the most beautiful sound in the world.
There are still things--still pregnant bellies and no fathers, still concerns about a good man ever coming into their life, still fears about there not being money to send them to school. There is still lizard poop on my bed, and computers and cameras that are stolen and sometimes the ants that crawl on me in the middle of the night. There are still worries at what I will not be able to give them for lack of resources.

But we are together.

Josephine, Florence, and Linda have all received Jesus now. And the girls make fun of me because when I try to say "What is wrong?" in Acholi it comes out, "You are squatting badly," just because I can't make the sound from the back of my throat.

But we laugh and I don't care that I'll probably never be fluent. Wajule. Welcome to our home.
And even though I still fall into bed at night sometimes exhausted and my prayers are usually short sentences I whisper under my breath for them during the day---I fall asleep with a smile because this life is a breathed prayer, an answer to prayer, a prayer God dreamed in my memory. And it's come true.


Disclaimer: there will probably be fewer pictures for at least a month. Camera and computer stolen. Crushed. But surprisingly mitigated by an armful of screaming girls and hugs I received upon my arrival back home.

I don't think we realize how much we need hope until it is offered to us, wide and spacious as an open field at dawn. It is then that we realize how desperate we were for it. And slowly we understand that somewhere it was taken from us and our hearts got hard. Because they had to. But softly, and nearly imperceptible, they are coming back to life.

I watched two grown black men cry last night. And it was beautiful. Last night, the world was part of something historic and whether you are white, black, Republican or Democrat, it doesn't really matter. Last night, we proved to the world that the barriers of our skin are dissolving. It was a promise. A promise for a continent that I love that change is possible. People were holding each other over the noise of people shouting and shushing and for a moment I sensed the unity that the crowds must have felt listening to Dr. Martin Luther King or Nelson Mandela. There was love in that room. Love and a promise. And somewhere inside of us we are finding the strength to believe in it again. To believe that Africa is not less-than and that for a moment, and maybe in time, we can be one. To believe that girls who are raped and girls who have killed can start over. To believe that God will not leave us in our mess for long and that love really can change the world. To believe again.
Posted by Unknown at 3:43 PM 1 comment: