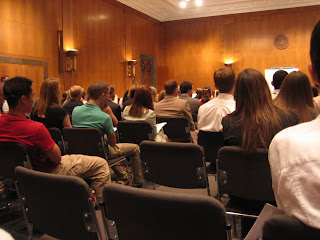 (An event in DC on Capitol Hill for peace in N. Uganda) 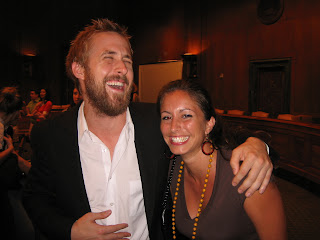 (yours truly laughing with Ryan Gosling as he said, "Let's make it look like we're having a really great time." I think I can do that)

"Africa is a continent of second chances."

John Prendergast made this statement last week at an event on Capitol Hill for peace in Northern Uganda. That is certainly true for one young woman named Grace Akallo.
Grace is a miracle in human form. She was buried alive by members of the LRA and dug her way out. Not only was she a child soldier, but she was also given as a "wife" to a man who she describes in her book Girl Soldier, "His eyes were always red. The ones who had turned from men to killers, their eyes were always red."

In a job where it seems every step you take leads you to an even higher step, and news from a place I love that is often filled with bad news, Grace stands out like an olive branch offering me hope. She just graduated from Gordon Conwell University and speaks out for her friends still trapped in the bush. She is what I dream of when I see the future of Zion Project and when I see this one girl walking towards her dreams, I imagine them all finding what it is that makes them feel alive again.
My dream, is to see their dreams come true.

Last week was a beautiful week. There were Senate hearings and panel discussions with names like Betty Bigombe (the fearless Ugandan woman who went out into the bush alone to meet with Joseph Kony and was able to start peace negotiations while the rest of the world sat idly by) and yes, even Ryan Gosling (you may remember him as the winner of the "best kiss" in the Notebook. And yes, I met him, and no I did not gush all over him, I actually held a respectable conversation with him before shamelessly asking for a photo :) Ryan is working on a feature film which he will direct in Northern Uganda starring child soldiers as child soldiers. Sadly, white girls from America don't qualify for a role, but I think I can point him to some amazing Acholi who could put Blood Diamond to shame. I believe it will be very redemptive for them to translate their experiences of pain into something that can transform the world's apathy.

All these incredible individuals are working together to confront Congress and the United States with their lack of action on the part of the Acholi people. We weren't asking for much. Not even a special envoy. Just a diplomat to go to Uganda and be there as a representative of the US saying that we are invested in Uganda's future and this peace process. So simple right? This week with all the press and pressure, with the hundreds that turned out for the events, I feel a twinge of excitement with the thought that we can do this! We are making progress and that now is our best opportunity ever to see peace that has been absent for 21 years. I saw how God uses even our political process to bring his heaven to earth.

I met all these beautiful people who are fighting and giving their lives for Uganda, a place that does not belong to us, but a place we belong to. They inspired me to keep going when the vision still seems a mirage in the desert that I just can't reach. We are in this together. We may not wear bell-bottoms but we bear in our hearts the brand that says we will not stand for injustice. God is building something in us, this generation, that can't be taken away. We are being heard and being used, one heart at a time, one letter at a time, one Senator at at time, one country at a time and this purpose cannot be thwarted. There will be peace in Uganda. I will see girls laughing again. First in a dream, and then...clearly.

Be a part of it. To take political action visit:

This month has been a great month for Zion Project. Things are moving forward with all the paperwork (my least favorite thing :) and some amazing opportunities have opened up for fundraising and for the future. I met an incredible Ugandan woman named Patricia, she is a fire-ball and a diva. Obviously, I adore her. We've got big plans. Together we may just be unstoppable :)

July will prove to be a busy month for me (I have it off from the rug-rats) but will be focusing on Uganda and starting to fundraise to go back. If you have a church or group you'd like me to speak at, please let me know.

Don't stop following your dreams. You'll find me out there following mine.