Zion Project to aid in Awareness Campaign about Girl Child Soldiers in collaboration with the film & to star in the documentary!

Email ThisBlogThis!Share to TwitterShare to FacebookShare to Pinterest
Janine's Story

My father married two wives besides my mom so life became difficult. We were left to stay with our grandfather who was not bothering so much about us. I went away and followed my mother to her new love but my mom's husband, a drunkard, would beat my mother every day and throw us out of the house and hated me so much. He even sold all the household items for buying drinks. I left school in 1999. I never lived a free life. The government soldiers would come out of the bush and rape young girls. It happened to my sister. My uncle tried to stop them and they beat him to death.

Laurent Kabila (the president) and Bemba, the rebel, were fighting so the government started recruiting children into the army by force. That day the army troops came to our school and forced us to carry guns and start training to fight the rebels. I was 18 years old. Many children were killed because the training was short time and the rebel armies were well trained men who killed most of the children recruited with no experience. We escaped from gov't recruits. We came to surrender under care of the rebels because they were not killing those who come to them. But the gov't troops were killing people because the president gave orders that the area should be cleared of people, anybody found is to be shot.

In 2001 in the rebels camp I met a ugandan soldier who had come to support the rebels fighting against the gov't. My fear was if I remained in Congo I would be raped and killed like all the others, so I thought I would get security if I came to Uganda.

We got together and came to Uganda and went to the parents of the man but at that time it was under attack of the Karamajong, so we spend our nights in the bush. In 2003 the man started beating me every day. He cut my lip with a razor blade trying to spoil my face. He would bite me. I have scars all over my body. He said he would spoil my shape. He said he was going to kill me and he brought home a large stick, but a fellow soldier warned me and helped me escape. I ran away and got married to another army officer who had many wives. I feared they would kill me. Then later the man chased me away.
I started going to nightclubs, drinking, smoking, practicing witchcraft and selling myself to win the favor of the man. I would steal money from men and neighbors. I was in a group of girls and I would steal their money and beat them up. When they refused to give money sometimes men would beat me.

One time a man took me to his house but said he did not have any money to pay me, but I was almost killed. From that day I wanted to leave this life.

My painful experience was that Kabira's army would come to families and force the fathers to have sex with their daughters and ask them how it tasted. Then they came to my mother and grandmother and 6 of them raped her and then after she collapsed and died.

My home in Congo is in the rebel's hands. They are restricted from moving. I cannot go back.

On 17th of March 2009 I met Jesus who convicted me and I came to confess with my mouth that He is my savior. We met mama miriam at a funeral in the barracks where 4 children were burned to death. I found that life can be short. I received christ and came to stay in this house the next day. Glory to God, I am now saved. I left that life and I never want to go back. Now I don't have to worry every day about where to get food or how I might suffer at the hands of men. I feel like a baby seeing the world for the first time.
Posted by Unknown at 3:07 PM No comments: 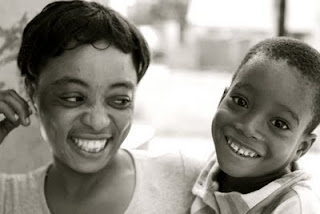 Congolese girls to be evicted from our Home in Gulu

I write this knowing that ONLY God can solve the situation we are in. So I ask you to PRAY because this is the only thing I know how to do right now and because I believe God hears us and WILL MOVE.

I spoke to the landlord finally after trying for several days and he was unwilling to change his mind about evicting my Congolese girls and will not give us more time. I do not fully understand his reasons, but we are out at the end of August, which is not a lot of time to find a house in Gulu. I know this is spiritual warfare because the girls are doing so well and have even started doing outreach to other prostitutes in Gulu, but I believe God wants to use this for promotion.

I've apologized to the landlord and done everything that is humanly possible so now it is only God who can find us a new home.

1) INTERCEDE with us and my girls in Uganda who are praying even now, that God would provide the PERFECT HOME for these girls who have been displaced so many times in their lives and just as they are getting settled, chaos erupts again. I know God can give us ABOVE & BEYOND what we can hope for, so pray for that :)

2) PRAY for the PERFECT PRICE---we can only afford a certain amount per month so pray that God would be generous towards us. If you would like to make a donation towards finding new housing please go to:
http://www.zionproject.org/donat...

It normally costs us around $1,500 a month per house to keep the girls there and provide for their needs and those of their children (which includes food, medical, counseling, mentoring, job skills, school fees & a loving community)

4) PRAY for the girls and their children, that they would not worry, but be full of PEACE knowing that their Father in Heaven cares for them and that they will be able to transition smoothly, that it would be even better than their expectations!

Thank you for all your kinds words of love to me, your continual support, and your prayers.
You are a wonderful family to have :)

love,
Sarita
Posted by Unknown at 2:51 PM No comments:

Please stop and pray with us right now. I just received notice from Gulu that our landlord is evicting all our girls at the end of next month. We had no warning, and no understanding of why this is. It could be because they are Congolese, it could be that someone offered to pay him more money for the house, but either way please pray that

1) God would change his heart towards mercy
and
2) That if is heart is hard, that God would MIRACULOUSLY find us a home for these 10 girls and babies and children who will have no home at the end of this month.

I also received word that our other landlord for our Acholi home is trying to raise our rent double what it is right now starting in October...so I may be looking at finding 2 new houses.

Uganda is notorious for having corrupt landlords and this is a spiritual battle. My wedding is in 37 days and all of a sudden this happens...I know it is just the enemy trying to discourage the work that God is doing in these girls' hearts and minds. These girls who were once prostitutes, have already changed so much and they have a new life and now they are faced with having to be on the street again.

In Gulu it is very difficult to find housing, especially with such short notice, please pray that God would open another door for these girls. I go back in September, but it will be too late to deal with this problem. Please PRAY that God would give us the funds to eventually build our own home, so we won't have to deal with these issues anymore.

Thank you for your prayers and standing with us. The true power is in us coming together to seek God's face.

with love,
Sarita
Posted by Unknown at 1:39 PM No comments: