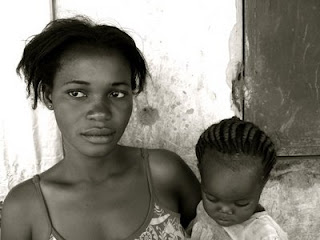 Caught in the crossfire of bullets they only wanted to survive it. To outrun the cycle of war, rape, and the blaze of huts as they were destroyed. They promised them safety. A future. Maybe even a marriage. A truck out of hell, out of the heart of darkness. But it would cost them something. Just a body. Just a soul. Just a life.

When the Ugandan People's Defense Force (UPDF) rolled out of Congo in a billow of dust and sand it took the beautiful, fair-skinned Congolese women with it. Traded one hell for another. Dropped them off in Gulu, spirits broken and penniless. Some pregnant. Some unwell. And unable to speak the language. Soldiers sworn to protect a country, taking what they can and discarding the remains at the border.

What choice did they have really? Refugees in a nation that didn't want them. Branded for lack of speech.
They live in a place called Kisubi, a section of Gulu where the compound is full of slapstick rooms and the air smells of urine.
Where everyone knows who they are and why they live there. There are 4 other communities just like it in Gulu alone.

Sell their body to the highest bidder and hope they can convince him to wear a condom. Out of the twenty of them with painted faces and styled hair, I can see the disease in some of them. The disease that hollows out their eyes and makes them thin. Where a woman of 26 can look like she's 40. While their children play with plastic bags.

But they are a family.
Live together or die alone.
They share food and when one grows too sick to move they take up a collection to get her to the hospital. They take care of each other.
THey never wanted this life but when I ask them if they ever think of going home they say,
"There is nothing to go back to."
Families dead. Homes burned down.
And all they want are English classes.
They want to learn a language that will make them less
alone.
They want to leave this life.
Just a single chance to start over.

Here, in the day in day out encyclopedia of need and takers who bleed you dry, compassion is hard to come by.
But I sit there crying. Because in the middle of it all, they are singing worship songs in Swahili.
And it's something I understand.

I don't know what tomorrow will bring. I still dream dreams too big for me. Offering English classes. Offering a home.

Because they taught me to see again.
Posted by Unknown at 5:55 AM

that was beautifully written and filled with heart and passion and humility.

i will be praying for these beautiful women - they are loved by God, they are His precious daughters. may they be offered a way out of this hell and into His heart. think of Jesus writing in the sand with the prostitute in front of Him. what brought her out? Love.

continue loving sarita. it works....whether you can see it or not....

ps - can you find out where these ladies are from exactly in congo?

Although out of sight, you are much thought of and even more valued and loved.

Bless you for being and doing as Christ would.

In His glory and love