MY TRIP TO UGANDA 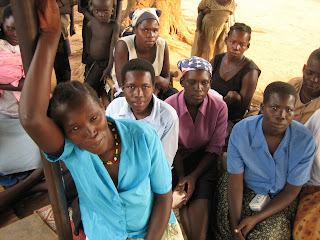 I never know where to begin to talk about my experiences in Northern Uganda. It's as if when I come back, my heart is still over there and mouth has not yet caught up with my heart. Gradually stories will come out of me as I regain touch with that part of my heart that is reserved for that place and those people, but my processing is often slow. I come back almost paralyzed by the mountain of things I would LOVE to do for all those girls and by the vast chasm that separates that dream and my actual life. Change is slow. Loving those who have not been loved and are suspicious of it, is often painful. And yet….there are the Knightey's of this world who live in IDP camps only to become impregnated again, who smile at you and remember your name. The fact a simple visit could give someone hope is beyond me, and yet that is the power of human connection.

WHAT DID I DO OVER THERE? (the brief version :)

*I visited programs that I can partner with in the future to love and counsel girl soldiers. One in particular was very similar to what I'd like to do in terms of Income Generating Activities for the girls and creating community for them. The major difference being they did not offer long-term Christian counseling support or a follow-up program for after girls leave the Child Mother Village.

*I went on a week-long counseling retreat in Jinja for myself and also to learn more about helping girl soldiers in their healing process. It was incredible.

That was it in a nutshell. It was a GREAT trip and much needed for figuring out future steps. So all my prayers were answered. Much more was done in me than I believe that I did, but that is pretty standard in my experience of Africa.

I was utterly moved by the girls and even the men who ran up to me to give me hugs as though I had been gone a day, as though I was someone important. I was saddened by the girls I had met last time who were now pregnant again, possibly by rape, possibly by necessity for food. I lost hope at the fact that so little have returned home because peace talks have once again fallen through. I am regaining it slowly by degrees as I watch movies like Amazing Grace, or see resolutions pass that I have called my congressman about. I see that the fight may be long and hard, but it is still worth fighting. 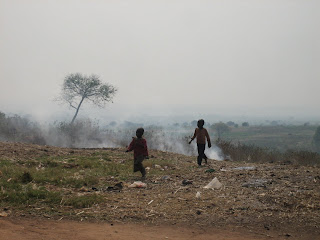 Am I willing to spend the next thirty years of my life working towards a cause I believe in? Is the slavery that if we had been alive we would have fought against, any more than the slavery 2 million endure every day of their lives in a war zone? Aren't we still saying through our inaction that inhumanity is o.k. and Africans are not as important to us as our own? Aren't we still saying that injustice is ok as long as it doesn’t affect OUR lives?

Katrina hits and we rush to give money to the Red Cross, but thousands more are displaced in Uganda and we cannot drum up the same compassion for them? Do we really believe Africans our brothers and sisters or do we still have the same kind of slave mentality that William Wilberforce stood up against? It's a question we have to ask ourselves. 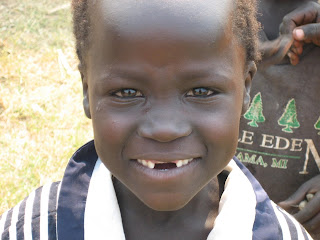 I realized I was enthusiastic and impulsive in my belief that I could begin a non-profit in Uganda in a month, but I am no less determined that someday it will be. I’m excited now rather, at the prospect of joining an already miraculous ministry that I fully believe is changing Uganda one person at a time. Favor of God is beautiful to me in its sense of family. The mornings I spent worshiping with Ugandans and white people who truly live with the people, as one of them, like Jesus lived with us, were some of the most precious of my life. And the night I saw a room of huddled children on their knees, skinny arms outstretched to the sky, or faces pressed to a dirty floor with tears of worship to a God they truly believed in, I knew that revival is coming to Uganda and it is coming through children. They gave me hope that Uganda will not always be at war, but that they are already rising and there will be peace, not only of a country, but in suffering hearts. 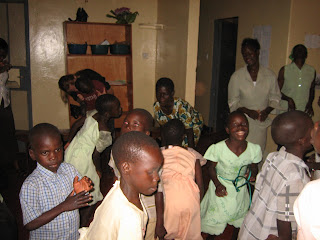 I cried as I watched them, even though I tried not to stare, I could hardly help it because it was like seeing the glory of God in shining faces, with a passion that I longed to have, with a desperation many of us have forgotten. At first I thought maybe they were performing for their white visitors, but their eyes were closed, and when they danced they did it with such intensity and such joy, I knew they’ve experienced God in a way I am still yearning for. That's why we must go. That’s why we must love the girls and boys we can and draw them out of their suffering—to believe again in joy and in the dream that a life can be redeemed. One boy used to run away when he first came to the orphanage. He was so used to the camps and to alone-ness he did not know what it was like to be loved. He jumps higher than them all now. It can happen. Lives can be changed for the good, hope restored to the destitute, even when peace agreements fall through. The children taught me that. And given the chance, they could teach their country and the world that too.

Go to http://www.favorofgod.org/ to find out how you can help sponsor a child in Northern Uganda. I have been there and I have seen the children loved and I have seen how much they have done with so little resources. They truly give everything back to the people.

As for me and as for Zion Project, I still keep moving things forward here but no longer care whether I love those kids and those girls through my organization or another one that is truly accountable to their calling. We are knitted together in our love for the Ugandan people and our desire to see healing and life come to them. We are under God's banner, not our own. I believe that when I go back to Uganda I will partner with Carol with Favor of God and learn from her because I know she is doing it right. I know I will continue to love and fight for the dreams of girl child soldiers but only God knows in what way it will happen. The funny thing about a dream is that it requires it be surrendered over and over again to something greater than ourselves because otherwise we will get in the way of it.

But that doesn't mean that we have to lose momentum. 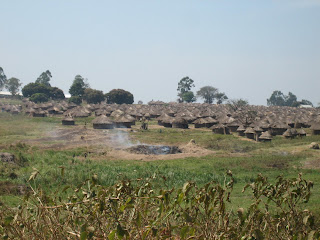 The peace agreement between the Lord's Resistance Army and the Gov't of Uganda fell through on February 28th. They have not yet resumed negotiations. This is devastating to those of us who have been fighting for the people of Uganda.
Positively, a resolution passed Senate on Thursday which stated that the US would recommit to urging both parties to resume peace negotiations. This was a small victory but one which I celebrate because I called my representatives about it and because we take every inch we can in this battle. To find out how you can become more politically involved visit:
http://www.ugandacan.org/

Also on April 28th, Invisible Children is asking us to again raise our voices for peace by putting our own comforts aside. I’ll be volunteering for this movement in DC. If you're interested in volunteering please contact me.
http://www.invisiblechildren.com/theMovement/displaceMe

And lastly something I'm very excited about! In June a book will come out that gives the account of a girl child soldier, Grace Akallo. It was written by my friend Faith McDonnell. It will have pictures that I took of girl child soldiers in Northern Uganda. It is a very important piece of work as so little is known about the inside lives of child soldiers, especially girls. You can preorder it here:
http://www.chosenbooks.com/ME2/Audiences/dirmod.asp?sid=360E9371EE2645E3843D2D91EA7B79AB&nm=Search+by+Topic&amp;amp;amp;amp;amp;amp;amp;amp;amp;amp;amp;amp;amp;type=EcomBB&mod=E%2DCommerce%3A%3AProduct+Catalog&mid=70B7D6357AC74DCE82EF28E7D375E854&AudID=AB0DD17D27E9488F998873BBC9609AC9&tier=3&id=0DB859F4990A4E948DFB339FBB660EEA&ntier1=&ntier2=&ntier3=&ntier4=&ntier5= 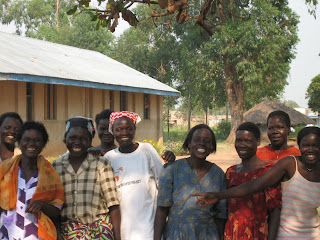 I want to leave you with something my friend James who works for Invisible Children in Gulu wrote. I have been to this camp and cannot believe that they have endured such suffering and yet can still reach out to help others. It is gorgeous and gives me hope:

What if government kicked you out of your home? And what if they forced you into a neighborhood where all the houses were in shambles and told you to fix up a single room and move your family into it? And what if a fire started in the neighborhood and all the houses on your side of the street burned down because the government had turned the water off? How would you feel? That's what has been happening to residents of northern Uganda's IDP camps for the last 10 years. The camps are filled with thatched roof huts, the only housing affordable for displaced families. Many huts are packed so tightly together that their roofs touch. Come dry season, a single spark can set any one of dry grass roofs ablaze and the flames will bound from hut to hut, destroying all the belongings of thousands of people with startling efficiency. Just last week it happened to my workers in Koro-Abili IDP camp. Fire swept through a portion of the camp, destroying over 400 huts. Ten families that worked for me lost their homes and most of their belongings. When I heard I was crushed for them. Forced into a long and torturous displacement, left to die by the thousands for lack of basic care, and then as a deadly side effect of this offense fire comes ripping through their lives, consuming what little they could call their own. My head shook itself. The next day I organized a meeting of the leaders of the Bracelet Campaign – the chairpersons who are themselves from the camps and make bracelets alongside the rest. I asked them if their bracelet makers would be willing to contribute to the rebuilding of the homes and lives of the fire victims. They said that they thought so and would ask. As of now the bracelet makers of Invisible Children, giving out of their relative poverty, have contributed over 400,000 shillings to their fellow workers, though some have never met each other. Though by American standards this is not much, for them it is sacrifice. Many gave more than they would spend on food for their family for a week, or two weeks. Invisible Children has agreed to match that sum, and many Invisible Children employees, moved by the generosity of those workers, have offered to give from their meager salaries to see that these families are restored to some vestige of normalcy, or what normalcy is possible in an IDP camp. So remember when you are faced with need that sometimes needs are greater, and are met by those who have less to spare. Let it be known that poverty won't stop grace, that hope doesn't kneel to oppression, that love overcomes war. [PS - Today I found out that when the fire started, all of the bracelet makers ran to the homes of their fellow bracelet makers that were in danger and saved what they could from the flames. That's community.]
Posted by Unknown at 4:10 PM

Sarita,
Beautiful summary of your time in Uganda. I want to hear more -- in person. When can we get together for coffee?
-Jen (Matt's Friend)