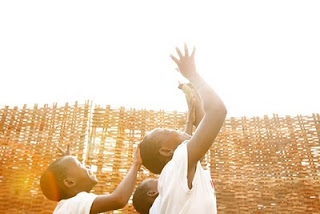 On Wednesday, the ZP prayer team and myself were fasting and praying for breakthrough and what was funny, is that without me saying, my team of women at the Counseling Center decided they wanted to pray and fast for 3 days--completely of their own accord. So on Wednesday, instead of eating lunch that was provided, these women, who often go hungry because they don't have enough money to buy food, who often go hungry for the sake of their love for Jesus, put food aside and prayed instead. I was completely humbled by it.

And God in His mercy, began to do something in my heart as I prepared my teachings on forgiveness. That until we move from a seat of judgment against someone else, to a seat of mercy, God's hands are tied to move on our behalf. And I realized, that while I had forgiven Miriam, I was still judging her, and still wanting justice, when really, regardless of all the things she has done, God is asking me to have mercy. And it makes no sense to the logical mind. So I wrote Miriam a letter asking HER forgiveness for any ways I hurt her in this whole process. And even though the police were supposed to go to her house to question her for harassment of the children at school....I asked them to call it off.

And I felt a shift inside myself---I felt rest and peace instead of discouragement. And even though the storms still rage around, and there are those who would try to use witchcraft to scare us, I feel peace that now that we've moved from a place of judgment, God will fight on our behalf and we need only to REST in Him and worship Him.

Through all of this, I've seen the Congolese women surround us with love and care and concern. And those that I have served, now serve me, by helping out with the children, and praying and fasting for me.

And teaching and counseling, has brought me joy that I had forgotten. Being with 18 women in a room, and seeing God touch them and heal places that from childhood had known pain---it is truly the best thing about my week.

One girl yesterday named Dorcas, wept openly in front of us as she shared how as a child she was accused of stealing a necklace from her aunty and was kicked out of that home, even though one of her cousins had put the necklace in her bag, to frame her. From that day on she had been called a thief and it wounded her. And God brought back that memory to ask her to forgive her cousin and to heal her. And as she did, I felt God remind me of a necklace my friends Cindy and Steve brought from America--and as a prophetic act to show her that God gives back everything that the enemy has tried to steal--I gave her the necklace as a gift. It was such a beautiful moment seeing God heal her and for her to understand how deeply God loves her and cares about all the small things we have tried to bury. He redeems all things.

So we carry on. And light touches the darkness. And it is dispelled.

Thank you for praying and fasting and believing with us.
All around the world we are joined through it.

love,
Sarita
Posted by Unknown at 3:18 AM